A tale of two photos.

For all intensive purposes, I was having a jolly good AM. I was planning on going to yoga later in the day, but woke up early and felt rested, so I caught the early class which was great. [side note: the studio I’ve been going to, Yoga on Yamhill, is ab fab: donation-based fee, full schedule, chill teachers- check it out PDX-ers!] I get home, settle into my java and interwebz routine, and…

GAH! Now you might not recognize the person above- I know I had difficulty doing so- but it is in fact dear Ri Ri. I don’t really know where to start about my disdain for this look, but I will say it ages her about 25 years and nearly dimmed my morning glow. Let us not linger, but cleanse our eyes!

Ah, much better. The above image was reblogged on Jane’s Vanity‘s tumblr, The Vanity Enchantment, which incidentally has me quite enchanted lately. Conversely, this photo makes me smile; I love the matte, bright colors, and of course the jewels. And what is she sipping? I think a milkshake, probably chocolate. Phew, all better.

In far more important news, I am very excited to share that I am a part of an experiment in consumerism (or lack thereof) called Flux: Fashion on Lend. By one of those magical Interwebz connections, I learned about this through a Tweet by Marjorie Skinner, the fashion writer for The Mercury, and immediately sought involvement with Laura Allcorn, the woman behind the project. Long story shorter, Laura and I met last week and I agreed to participate in her lending library 6 week trial consisting of 10 women who can borrow/”check out” one item of clothing at a time from her prime space in the Galleria Building right downtown [just a block away from Central Library, perf!]. 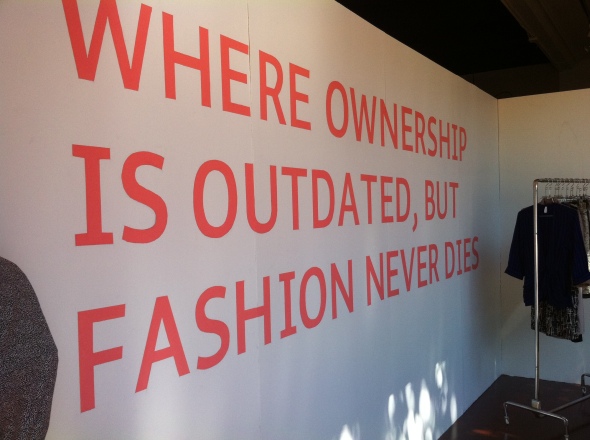 I am very interested in the idea of “alternative libraries” and have often pondered how awesome it would be to have a clothing/accessories library. I know that some form of this exists online for handbags [Sex & the City Movie anyone?!] but doing this locally and with predominantly thrifted items- as Laura is doing- is most appealing. I went to the space this weekend and selected my first item, a sheer lacy top that I wore out last night with a high waisted skirt and big silver necklace. I am going to wear it again this week to work and will try and get a photo, as I’d like to document all of my borrowed items and how many times I wear them. A priceless added bonus: Laura and I hit it off right away and I am grateful to have a new friend AND a new top. Win x 2.

That’s all for now Pose-rs. Wishing you all happy thoughts in your dear heads and sweet images on your screens; there is so much beauty to be seen!