The annual Metropolitan Museum of Art gala was Monday, May 2nd, and true to form, the event brought out just about every celebrity, model and/or designer on the planet. This year’s exhibition, Savage Beauty, celebrates the work of the late, great Alexander McQueen:

“People find my things sometimes aggressive. But I don’t see it as aggressive. I see it as romantic, dealing with a dark side of personality.” -Alexander McQueen

What I wouldn’t give for a ticket to NYC to view this collection! My hope is that sometime waaaay down the road the exhibition will land itself in the Textile & Fashion Arts Gallery at the Indianapolis Museum of Art and I will get to see it then. Cross yer well-manicured fingers!

This shin-dig never ceases to amaze me at the caliber of celebrities it draws. Now that I work more closely with events, I could not imagine the logistics involved in catering to a roster of attendees that includes Madonna and Karl Lagerfeld. My guess is that would include a lot of room temperature San Pelligrino and white flower petals.

I digress. Let’s judge some fashion! All photos linked to source, you know how I do.

Peter & Maggie:
One of my favorite H’wood couples, so happy to see them looking great.
An amazing dress,  no accessories needed [besides man candy]

Diane & Pacey, er, Joshua:
Um WOWSA. If you’re going to wear a dress with a slit to the pelvic bone, you better bring it and Diane most definitely does. She is my best dressed of the night/year so far. Crushing hard. Thanks to Jason Wu for the lovely gown.

Another one, just because:

I’m not one for “matchy matchy” accents, but I love how her lipstick, nails and toenails are all the same shade of f@#k me red. Well done, Diane!

Emma Roberts:
Who knew?! The kid’s got style. The midriff cut-out on this dress is perfectly sexy without showing too much.

WORST
[aka a whole lotta fug, to quote a friend]

Naomi Campbell:
This makes me wanna throw a ginorm flip phone circa 2002 at someone!

Freida Pinto:
I hate this dress. That’s all.

Mary-Kate Olsen:
WHAT IS THIS? A nightie? A moo moo? At least her sister took a risk. This is just plain yawn-inducing and ages her 10 years.

Andre Leon Talley:
Oh ALT, all devoted Vogue readers know about your struggles with weight. Why add bulk with this ridic tent thing? At least it has a train, which is sorta fab.

I’m forcing myself to stop there with the “worsts” as I could go on all night. But that is part of what I love about the Met Gala, it always showcases the highs and lows of fashion perfectly. I gotta give cred to everyone for wearing all this crazy shiz, as very few looks could be considered boring (besides yours, MK!!!) or thoughtless. Bravo to all! 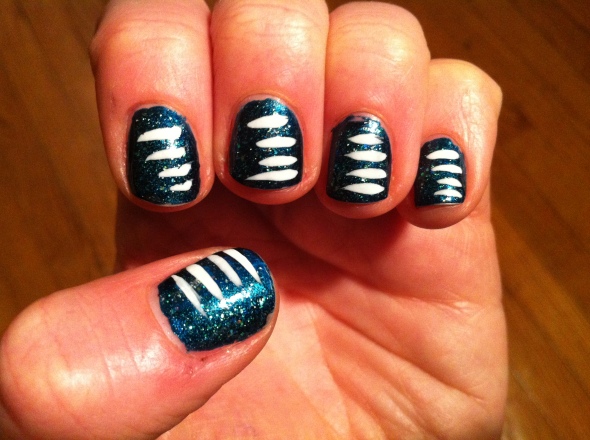 I know that I’ve been using lines a lot lately, but I just love them so much I can’t stop!

Hope you enjoyed my overview and feel free to share thoughts via comments [do it].
Cheers,

In fashion, when a particular item is practical, fits well, and is durable it is called a staple, a piece that is invited into one’s closet again and again [i.e. white collared shirt, solid layering tees, button up cardigans, etc.]. In blogging, when a trial invite is deemed a success, it becomes a collaboration [aka: letting others write about what they know/love]. Sports Fashion is a beautiful thing, the combining of two seemingly opposite worlds into one harmonious force. Fashion enhances the athlete/team/brand; sport provides the avenues and occasions for fashion to shine [sport also keeps those bodies looking so good in clothes, mmmm].
More on this by way of another Guest Post for my Pose-rs to enjoy. Reed on!

This past weekend was NBA All-Star weekend in Los Angeles, California.  Not only did the City of Angels bring out the big time celebs (Jack Nicholson court side in Red Ray-Ban Wayferer eyeglasses) and musicians for the game, but it also showcased a side of premier NBA players that few people ever see: their personal style off the court.  In addition, the All-Star game featured one-of-a-kind uniforms that were designed by Adidas this year.  (Adidas is the official uniform supplier to the NBA. Adidas is based in Portland.  Rose City holler!)   Without further adieu, let’s get down to the PoseCity best/worst dressed and Uni critique!

The NBA MVP of Fashion

No surprise here.  Amar’e does live in NYC, the heart of fashion central.  His style has been evolving over the past couple of years and since coming to NY this past off-season, his connections in the fashion world have greatly influenced his own personal style.  Amar’e has the intellectual look down.  This magenta carpet look is straight out of his repertoire.  His greyscale palette is very concise, well put together and seasonally appropriate.  The lapel widths are very complimentary to his 6′ 10″ frame and the pinstripes on the jacket really pop over the solids found on his pants, shirt and pocket insert.  The bow tie is a regular item for him and it is always encouraging to see a man that gets it just right.  The bow tie is impeccably tied, STRAIGHT, and also correctly fits with the width of the lapels on his suit jacket.  One last note on his look: some men are known to put on the glasses simply as an accessory.  Not Amar’e.  The glasses are truly functional for him.  Amar’e has been wearing glasses since suffering a detached retina injury earlier in his career.  He plays in protective glasses for each game.  Way to bring your “A” game to the All-Star game Magenta Carpet Amar’e!

The NBA LVP of Fashion

4-time NBA Champion, 3-time NBA Finals MVP, & 2-time NBA MVP Tim Duncan was the #1 LVP of All-Star weekend on the Magenta Carpet.  Wow, where to begin?  Okay . . . Tim we know you play in San Antonio and love to play Dungeons & Dragons, but that does not excuse you from being this fashion blind. If it were not for the sponsor board behind him, I would have guessed that someone captured a photo of him walking into 8a.m. practice.  Jeers to Tim for not arriving in more formal attire.  You are a champion, dress like one.  As far as the clothes go, a white button up shirt that one can clearly see your undershirt beneath?  And jeans, really?  Not only jeans, but jeans that are hella-relaxed.  Tim, relaxed fit jeans went out of style when you were at Wake Forest University in the mid-90’s!  Oh and don’t bother to tuck your shirt in either.  You are one of the best athletes in the world, show off your athletic build a little bit. At the very least put in SOME effort. Magenta carpet FAIL.

All-Star game uniforms rarely are aesthetically pleasing and this year was not all that different.  I must say that while I am not particularly impressed with this year’s showing, I am not altogether appalled by them either.  There are some really nice structural elements in these uniforms.  The typeface used is easy to read and the colors translated well on television.  I must say that I was disappointed to see Red vs. Blue (a bit too political if you ask me), but historically speaking that is the typical color matchup for the All-Star game.  It could have been worse, much worse.  The sequined style on the lettering in gold & silver definitely was noticeable on TV, but in my opinion was little bit too “Paris Hilton” even for an LA event.  I believe the letter coloring could have been a bit more muted on the uniforms.  However, the sequined style did work well on the warm up kits worn by the players.

UNIFORM INNOVATION: high-five to Adidas for its addition of stars on the upper back of each uniform.  Taking a nod from soccer, in which a star is representative of a championship, stars were added to the uniforms to represent how many times a player has been an All-Star.

For more detailed Hi-Res photos of the uniforms and warmups check this website.

I’d put in a vote on having the All-Star game in Los Angeles every year.  The Staples Center complex downtown is perfect for all of the festivities and where else is better suited for Sport, Fashion, Celebs, & Music?

And truly, where else is better to break it all down than on PoseCity?! Much thanks to my Guest Poster for all his observations.

All-Stars come in the form of NBA superstars AND mega cute tennies. Sports and Fashion, natch!